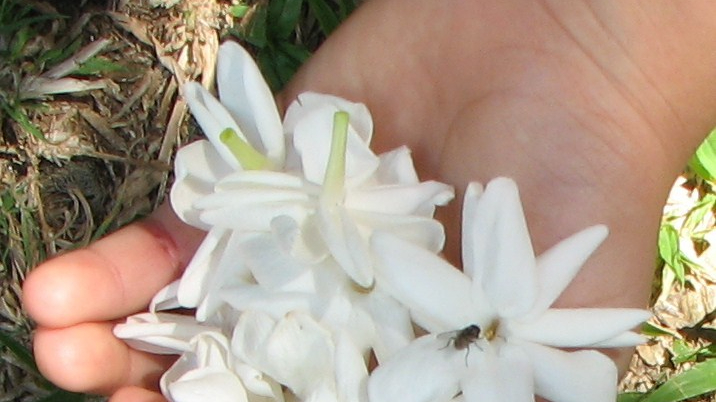 Welcome to the Sampaguita Capital of the Philippines,  The city of San Pedro in Laguna greets you with these words; and every year celebrates the Sampaguita festival in February, faithfully keeping the traditional tribute to the national flower in bloom, no matter that the sampaguitas are not visible like before.

Instead, subdivisions and condominiums have taken over space and scenery.     San Pedro, due to its proximity to Metro Manila, has become the most preferred residential area.

In early 2000, a viability study was conducted on the future of the sampaguita garland  industry. Although it  provided a livelihood source, the findings for its future  were not favorable . Sampaguita farming demands utmost care and protection because the flowers are naturally delicate and more prone to insect harm. True that today there are fewer farms; thus, most buds, abaca strings and floral pendants come from nearby provinces, like Quezon, Batangas, Cavite, even as far as Pampanga. Only the garland makers are home grown. Sampaguita garland making is a skill handed from grandmothers to grandchildren, a craftmaking expertise which the San Pedronians hold on to with pride.

Home to the country’s  National Flower is a distinction, a birthright to be nurtured, promoted and elevated to top priority of the city leadership. City Tourism, Arts and Culture OIC  John Manzano, awarded the Tunog San Pedro winners at Robinson’s Galleria South last February 28, culmination of the month-long festivity highlight of which is the Sampaguita Festival.

Simultaneously, to boost local tourism, the greening of San Pedro does not only focus on conversion of vacant lots into organic vegetable plots, but now includes a serious look into and active support for the remaining sampaguita farms. Engineer Enrique “King” Layola, head of the city agriculture office recently launched the Techno-Demo Farm for sampaguita production while the Pacita Organic Vegetable Gardens are in full swing.   #DM

Unearthing Themes in School Leadership During the Time of COVID-19