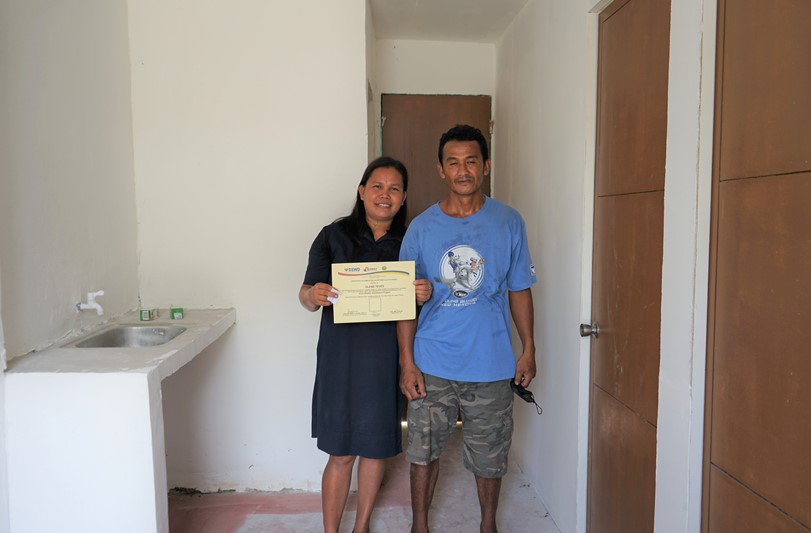 It was, indeed, a sigh of relief for the couple, Glind and Jose Teves, who survived two typhoons – Sendong in 2011 and Odette in 2021.

On September 8, the couple happily moved into their new home after receiving the Certificate of Completion, Acceptance, and Occupancy from the Department of Social Welfare and Development (DSWD)- Field Office VII. Their new house, located at a resettlement village in Barangay Sta. Cruz Viejo, Tanjay City in Negros Oriental, was built through the Core Shelter Assistance Program (CSAP) of the DSWD.

The CSAP provides disaster-affected families with environmentally-friendly and structurally-strong housing units that can withstand 220 kilometers per hour wind velocity, earthquakes up to intensity 4 on the Richter scale, and other similar natural hazards. The housing units are built on relocation sites identified by the local government units (LGUs).

With their sturdier home built in a safer location, the couple no longer have to worry about being displaced when a disaster occurs.

The Teves family was one of the affected residents whose houses were totally damaged during the onslaught of Typhoon Sendong, which caused flash floods in over 14 barangays in Tanjay City in 2011.

“Sobra ka sakit nga wa ko gadahum nga mao to ang mahitabo sa among napundar na balay  (It was painful, I did not expect it would happen to our house),” Glind shared.

However, the trial did not stop there as the family was again challenged when Typhoon Odette occurred in 2021. During that time, their family was living near a river, and the water overflowed and reached almost two meters above the ground.

“Ang among experience ato nga time wa mi gadahum ang tubig lapaw na namo, maayo gani nalipay ko akong mga anak kabalo manglangoy ako ra juy dili pero nakaingon gyud ko nga murag milagro to naabot sa among kinabuhi. Bulahan gyud nang nitoo tag Ginoo kay saksi akong bana, akong anak nga walay pay 1-year-old, amo syang giisa para lang jud makalabang mi nya ako nagkinto-kinto na jud ko pag-ayo (Our experience…at that time, we did not expect the water level to go above a person’s height. I was just grateful that my children knew how to swim, even though I cannot. All I can say is that it is a miracle. Indeed, blessed are those who believe in God. My husband can attest that we lifted our almost 1-year-old child while tiptoeing just to cross from our house to a safer ground),” Glind said as she recalled her experience when Typhoon Odette hit Negros Oriental.

The Teves family was among the 14 family-beneficiaries of the CSAP who finally got to start a new life in their new home after a simple ceremonial turnover in the resettlement village. They will now join the 40 other families already living in the village, whose homes were turned over in 2022 and 2021.

“Lipay mi nga naapil na karon kay para kung naay maabot nga trahedya, safe na mi labi na kanang mahitabo sa dis oras sa gabii (We are happy that we are now beneficiaries. When a tragedy occurs, especially those that happen in the middle of the night, I am sure that we are safe),” Glind happily said.

In total, the DSWD, through its Field Office VII, has successfully turned over 54 houses to eligible families out of 82 units being targeted for construction in Tanjay City. The project has a total cost of P3.78 million.

Under the Memorandum of Agreement between the DSWD and the LGU of Tanjay for the implementation of CSAP, the Department is responsible for the transferring of funds to the LGU; providing technical assistance from project development to construction to ensure that the basic project standards are met; and monitoring the status of the project as well as the utilization of funds; among others. Whereas the LGU of Tanjay is responsible for acquiring a lot and providing a safe and accessible relocation site within the city/municipality for the shelter units of the affected families; facilitating survey and developing the site, drainage, road network, and electrical water connections. It shall also take full responsibility in the proper construction of the shelter units. ###