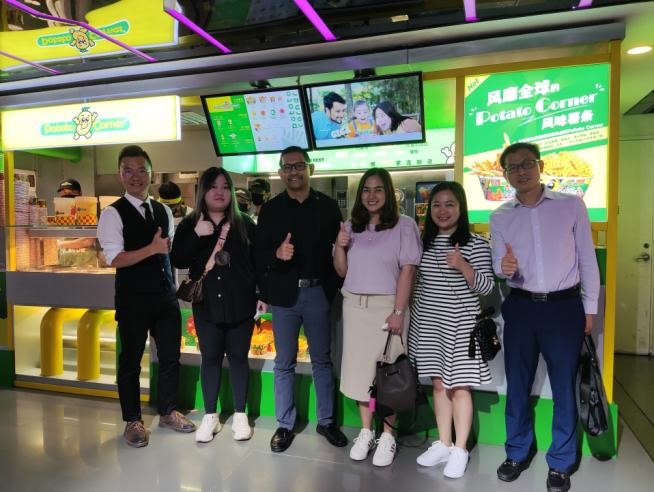 Potato Corner, the Philippine franchise which has been the entry point of many entrepreneurs to start their own business, opened its first-ever store in South China at the Comic City in Guangzhou last May 2022.

Ms. Amber Xia who holds the franchise at Comic City along with Mr. Qiu Jiedong said that the Philippines’ best fries have quickly become very popular among Chinese patrons, especially among young professionals and youths/children.

Ms. Xia explained that the brand’s popularity quickly grew through Chinese social media platforms such as Douyin, Xiaohongshu, and Weibo.

Consul General Alferez during his visit encouraged Ms. Xia to explore more Filipino food franchises as many of these companies have been successful in their expansion overseas and are continue growing.

Mr. Liu added that PTIC-Guangzhou, the Philippine Department of Trade and Industry’s (DTI) office in South China, “will continue to assist the franchise with what they need for business expansion,” narrating that it provided commercial and comparative information to the  headquarters of Potato Corner in selecting outlet options in the city when its technical team reached out to the DTI office in Guangzhou in 2021.

Even during the pandemic, the Philippine Consulate General in Guangzhou and PTIC-Guangzhou have worked with the Philippine Franchise Association (PFA) in expanding business opportunities for Filipino franchises such as Potato Corner, specifically in South China.

Currently, apart from the Guangzhou City, Ms. Xia has also opened stores in Hengyang in Hunan Province in January 2022. Also launched last June 6 was the Shenzhen outlet in Guangdong Province, the second in South China after the Comic City branch.

The second outlet in Guangzhou City is also expected to be launched soon.

Potato Corner aims to eventually open stores in every major Chinese city over the long term.

Potato Corner opened its first outlet in the Philippines in October 1992 and began franchising the year after. Today, it has grown from small carts to in-line stores found in almost every corner of the world – in malls, schools, hospitals, bus stations, amusement parks, and even tourist destinations in various countries. END

Next post DTI responds to CSAP, clarifies arguments/issues on SRP